A k-means cluster analysis was conducted to identify subgroups of college students based on their similarity of responses to an evaluation questioner regarding classes they attended. The dataset included a total of 5820 records

Data were randomly split into a training set that included 70% of the observations and a test set that included 30% of the observations. A series of k-means cluster analyses were conducted on the training data specifying k=1-9 clusters, using Euclidean distance. The variance in the clustering variables that was accounted for by the clusters was plotted for each of the nine cluster solutions in an elbow curve to provide guidance for choosing the number of clusters to interpret.

Canonical discriminant analyses was used to reduce the 15 clustering variable down a few variables that accounted for most of the variance in the clustering variables. A scatterplot of the first two canonical variables by cluster (see below) indicated that the two clusters had almost no within cluster variance, and did not overlap. The two clusters were not densely packed suggesting a relatively high within cluster variance.

The means on the clustering variables showed this was the first attempt at this class for students in cluster-1 (negative average), students in this cluster had a high attendance record (compared to cluster-1) and they had a favorable impression about their classes. Students in cluster-1 had a poor attendance record, many repeating their classes and had negative impression about classes they were taking.

In order to validate the clusters, an Analysis of Variance (ANOVA) was conducting to test for significant differences between the clusters on Q9 (students who greatly enjoyed their class and were eager to participate).

A lasso regression analysis was conducted to identify a subset of predictors from a pool of 23 categorical and quantitative variables that best predicted a quantitative target variable. The target variable in this case was school connectedness in adolescents. Categorical predictors included gender and a series of 5 binary categorical variables for race and ethnicity (Hispanic, White, Black, Native American and Asian) to improve interpretability of the selected model with fewer predictors.

Data was collected by asking individual questions about whether the adolescent had ever used alcohol, marijuana, cocaine or inhalants. Additional categorical predictors included the availability of cigarettes in the home, whether or not either parent was on public assistance and any experience with being expelled from school. Quantitative predictor variables include age, alcohol problems, and a measure of deviance that included such behaviors as vandalism, other property damage, lying, stealing, running away, driving without permission, selling drugs, and skipping school. Another scale for violence, one for depression, and others measuring self-esteem, parental presence, parental activities, family connectedness and grade point average were also included.

As predictors are added to the model, the Mean Square Error (MSE) maintains same pattern. Initially it decreases rapidly then it levels off where adding more predictors does not lead to much reduction in the MSE.

The MSE for the training data stood at 18.15 while it was 17.29 for the test data, while a bit lower the overall prediction accuracy was pretty stable cross the two datasets.

The 24 predictor variables used has different importance levels in the prediction, the most important is Marijuana Use, followed by GPA and School Connectedness. The least important predictors are Asian and Native American (see below).

Accuracy of the prediction is 84%

From the accuracy plot below we can see that the subsequent growing of multiple trees adds little to the overall accuracy of the model suggesting that interpretation of a single decision tree is as appropriate. 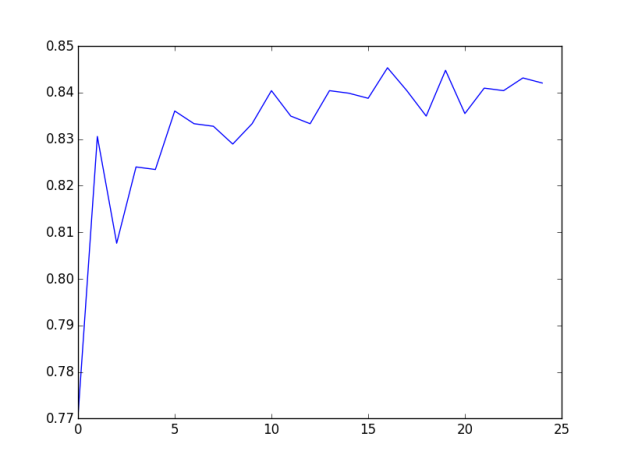 Decision tree analysis was performed to test nonlinear relationships among a set of predictors and a binary, categorical target variable. For the present analyses, the Gini Index was used to grow the tree and a cost complexity algorithm was used for pruning the full tree into a final subtree.

For simplicity only two predictor variables were used as possible contributors: Marijuana Use (marever1) and Cigarette Availability (cigavail). Marijuana Use was the most important predictor.

The prediction has a 75% accuracy rate.

The ‘Marijuana Use’ score was the first variable to separate the sample into two subgroups.

With many prestigious universities offering free MOOCs, below you can find a listing of the leading sites. Check them out, I’m sure you will find a class you like.